A Long Letter from Rick – Part 2

In the last blog installment of Informant America it was noted that I received a long letter from Rick Wershe who is now in prison in Florida. Communication with Rick, or any inmate in the Florida prison system, is not easy. Rick has spent nearly 30 years behind bars, most of them in Michigan. He says the Florida Corrections System is real culture shock. This blog continues with quotes from Rick’s letter…

Rick Wershe wrote his multi-page letter to me standing up. He had no choice. There is no place to sit in his two-man cell. “There’s not anywhere in the cell to sit down and write a letter,” he writes. “I stand up and use the top bunk to write on.” Eating meals in the cell is a challenge, too. “You stand up and eat off your tray or sit on the floor with the tray on your lap,” Wershe writes.

In a previous blog I wrote that prison food in Florida is nothing to write home about. It provides daily nutritional needs and that’s about it. Like prisons everywhere, Florida has “canteens” where prisoner with a little change in their pocket can buy snacks or simple foods like packaged soup. “The prices down here for a lot of things are more than double,” Wershe writes. “A soup in Michigan costs 34 cents. In Florida prisons, it’s 70 cents. (The cost of) Everything is 50% to 100% or more and here they have no paying jobs like in Michigan or with the Feds.”

What he’s referring to are paying work details in other state and federal prisons. Paid work details accomplish several things. They give inmates something useful to do with their time. It gives them a means of acquiring modest amounts of money they can spend inside on something they want. This mimics the world outside, where you work to earn money to spend. Imagine that. Yet, Florida doesn’t offer that constructive opportunity for prison inmates.

Someone reading this might sarcastically think, ‘Aw. Too bad for those poor criminals.’ That kind of hard-ass crime-and-punishment thinking might make some macho men feel better, but it comes down to a bigger question: do we want convicted criminals to do time behind bars and nothing more, or do we want to at least try to educate them in subtle but daily ways about acceptable ways to get a long in life on the outside?

You can learn a lot about the crime and punishment attitudes of each state by doing an Internet search of their “Corrections” Department websites.

Allow me to show you an example of what I’m talking about. If you think Rick Wershe is being wussy in his complaining about the Florida Department of Corrections, I invite you to do the following Google search:

Fire up Google and enter the following: Florida Department of Corrections Photos.

The first thing you get is this:

Click on it. It will take you to a page of “high resolution” images of—Death Row. You will find 23 images—all related to executing prisoners. 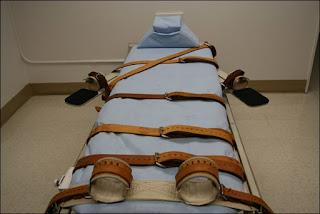 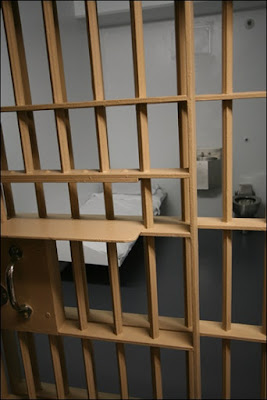 This is a cell where Florida inmates on Death Row wait to die. (Photo: Florida Dept. of Corrections)

There are 16 views of the Florida gas chamber, six views of Death row cells where inmates wait to die and one image of an electric chair. That’s it. That’s all the Florida Department of Corrections offers Internet visitors who would like to see images of what their “Corrections” system is all about.

Good luck finding other images. If you dig around you can find some. Like this one, celebrating trophies won by guards who work with attack and tracking dogs:

Bloodhounds for tracking escaped prisoners seem to be a favorite photo subject for the Florida Department of “Corrections”:

But as the photo above shows, the Florida Department of “Corrections” doesn’t just rely on dogs. They are ready for deadly combat with inmates, too:

Yes. Yes. They have to be ready for trouble because some of their guests are troublemakers. But it tells us a lot that Florida emphasizes photos of Death Row and attack dogs and assault troops in what might be called their public relations. It tells us that concepts like "corrections" and "rehabilitation" don't mean much in their prison system.

There’s a bit more in Rick Wershe’s letter from prison and I’ll share it in the next post.

***
Here’s how to write to Rick Wershe if you are inclined to do so. Be sure to include his inmate number in the address and on the head of the letter itself:

A long letter from Rick

Richard Wershe, Jr. is in a Florida prison serving the remainder of a jail term for a conviction in a car fraud and theft case. He was transferred to Florida after the Michigan Parole Board granted him a parole from a life prison term for a non-violent drug conviction when he was 18. He spent 29 1/2 years behind bars for the drug case. Wershe had been an FBI informant and he told on the wrong people, politically powerful people, who fought to keep him in prison until he died. He cost them a lot of money by telling the FBI about them. Communication with Wershe in Florida is difficult but recently he sent a lengthy letter…

I have not been able to communicate directly with Rick Wershe since mid-July. Communicating with inmates in the Florida prison system is difficult, even for defense attorneys.

When Wershe was assigned to a prison in Florida and I had an actual address, I sent him a letter. He sent a reply letter that runs several pages. It will be the basis for several Informant America blogs. In my letter to Rick I told him many people remain interested in his story. As of this weekend, the number of page views for Informant America numbers close to 344-thousand. The previous post, about Rick’s new “home” in Florida had over 65-hundred views.

I explained to Rick that people want to know what’s up with him. So, I’m going to quote from his letter because he knows people are interested.

Rick is in prison culture shock and he doesn’t mind saying so. “My new residence,” Rick writes, “Wow. Culture shock! No one should ever complain about a MI (Michigan) prison again!”

Wershe spent years at the Oaks Correctional Facility in Manistee on the western side of Michigan. There, he was in a security unit separated from the rest of the inmate population. He was in there with others who had been informants in important cases or they had been police officers or prosecutors or judges who might be in physical danger in the general inmate population.

Wershe had his own private cell. It was small, but it was his space. He had a little TV just for himself. Oaks has a restricted cable TV system but Rick could choose to watch what he wanted on the available channels, when he wanted. Not so in Florida.

The prison where he is locked up in Florida has “2-man cells with nothing in them, 2 bunks and 2 metal footlockers (plus) a metal sink and toilet.” He says both are old and “not very clean.” His letter continues, “Put it this way—in the last 29 ½ years I did (in prison), I have never lived like this.”

As for watching TV, there’s no private set in the cell. Wershe has to go to a “TV room” and watch one TV shared by “90 guys.” He says about half the inmates in his unit go to the TV room to watch the news, sports and maybe a few network TV shows. “Sure miss my own cell and own TV, no matter how small it was!” Rick writes.

Rick has had some difficulty just walking around. “The State of Florida issues you shoes that are like those “Croc sandals.” Inmates have to walk around in them until they can buy gym shoes, which takes about 2 months or so.”

Inmates have a dilemma. There aren’t work details where they can earn money, so accumulating cash for things like gym shoes can be a challenge. No, you can’t help Rick by sending him a pair. He has to wear prison-issue garb. Still, he’s anxious to get some canvas gym shoes because the prison-issue croc sandals, “made my feet swell walking in them, but you have no choice.”

There’s more in Rick’s letter and it will be shared in the next Informant America post.

If you want to send Rick a letter he would undoubtedly like to hear from you. But be aware the prison staff carefully reads all mail: going out and coming in. It would be wise to keep that in mind when writing a letter. Don’t forget to include his inmate number in the address:

For the latest information see What's New on vincewade.net
Posted by Vince Wade at 12:01 AM No comments: