For four long years, Rick Wershe, Jr.’s lawyer has been battling for his civil rights against cruel and unusual punishment in a slow-moving lawsuit before a Grand Rapids federal judge. The judge threw the case out, but attorney Ralph Musilli appealed to the 6th U.S. Court of Appeals and they essentially told the Grand Rapids judge, not so fast. This past week the appeals court advanced the case by scheduling it for oral arguments next month.

In the painfully slow game that is Rick Wershe’s fight for his civil rights, last week the Wershe team made a gain of 20 yards. The U.S. 6th Circuit Court of Appeals has signaled, through its orders, that it is curious about what the hell the State of Michigan is doing to Prisoner # 192034, otherwise known as Richard J. Wershe, Jr.

In addition, there's been another development in Rick's favor regarding the Michigan Parole Board. Consider that another five-yard gain. More on that in a moment.

Under the Eighth Amendment to the United States Constitution, all of us are entitled to a right against cruel and unusual punishment. This means, among other things, that among prison inmates, everyone must be treated equally. To do otherwise is unusual, and therefore, cruel punishment.

The appeals court appears to be curious enough about how Wershe has been treated to schedule oral arguments. In truth, it’s more of a question-and-answer session where a three-judge panel considering the case asks questions of the lawyers for both sides. The barristers have already submitted voluminous written arguments including a mind-numbing recitation of case law that only a judge could love.

Oral arguments in the appeals courts are also unusual these days. “In 2011, only one quarter of all federal appeals were orally argued, down from nearly two-thirds in the early 1980s, and the time allotted in most circuits was limited to fifteen minutes or less,” according to an article in The Journal of Appellate Practice and Process. (If you’re wondering where the hell I come up with this stuff, well, I sometimes wonder myself.) The law journal calls it an “extraordinary reduction in oral argument” in the name of “procedural efficiency.”

To put this in people-speak, these days it’s unusual for an appellate court to order oral arguments, but they have in the Wershe case.

I spoke with Rick by phone from prison after the order was given for oral arguments in his rights case and asked for his reaction.  He told me, “cautiously optimistic is a good way to put it.” As I noted in another blog post, Wershe has had the rug pulled out from under him so many times, he’s learned to temper any happiness he may feel about such things. 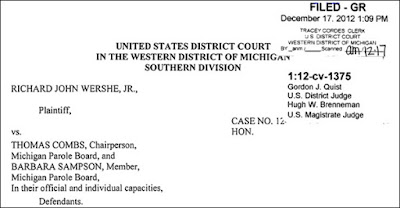 Ralph Musilli, Wershe’s attorney, has been waging this battle for a long time.

When Musilli says “they” he means the State of Michigan, the Michigan Parole Board, prosecutors; everyone opposed to Rick Wershe’s parole. I’m going to let Musilli explain, in his own words (questions, to be precise), what’s going on:

“How are they going to argue that Richard Wershe, Jr. has been treated fairly by this parole board?”

“What’s the excuse for him still being there?

“How do they justify not giving this guy a parole hearing since 2003?

“Twenty-nine years and five-year flops. What is that?” (Wershe gets “considered” for parole every five years. If the Parole Board votes “no interest” there’s no parole hearing. The inmate gets “flopped” for another five years. It’s a way of implementing a life sentence five years at a time.)

“How do they get around the fact that every other juvenile
sentenced under that statute has been out of prison for over a decade?”

“How are they going to argue that Richard Wershe, Jr. has been fairly by this parole board?”

“How many people in Wayne County, who have been convicted on violent offenses, have been released on parole since 2003? It’s thousands of them. And those people are all out on the street. And here you have a non-violent criminal who’s been in for 29 years. How do you reconcile that with fairness and how do you get around cruel and unusual punishment?

“What we are saying is, obviously, he has been treated differently than anybody else in his position (in the Michigan prison system). They’ve been emptying the prisons out.
They’ve been closing prisons here in Michigan.”

As Cuban-born Desi Arnaz used to frequently say to Lucille Ball on their 1950s TV comedy show, “Alright, start ‘splainin’.”
In this instance, the State of Michigan has some “splainin’” to do to the U.S. 6th Circuit Court of Appeals.

In mid-December the Wershe defense team filed a new pleading in Detroit federal court for a writ of habeas corpus. That means the State of Michigan must appear before a federal judge and explain why they are keeping Wershe in prison in light of prevailing case law indicating he should be released on parole. The State, represented by the State Attorney General, has until June to come up with an answer. This is in addition to the civil rights lawsuit being considered by the Court of Appeals in Cincinnati. The motion for a writ of habeas corpus apparently was one legal battle too many for the State of Michigan over this lone prisoner.

Less than a week later, the Michigan Parole Board announced they were moving up Wershe's next scheduled parole review by nearly a year. Wershe was amazed as the "system" started working on the process in earnest over the Christmas holidays. In his 29 years in prison he says he's never seen them move this fast on a parole.

The next step is for a designated member of the Parole Board to formally interview Wershe face to face to determine if he's fit for parole. Eric Smith, the number two guy at Oaks Correctional Facility, where Wershe is serving his time, has said Rick Wershe is as close to being a model prisoner as possible.

Now we learn the chairperson of the Parole Board himself, Michael Eagen, is going to personally participate with member Sonia Amos-Warchock in Wershe's mid-February interview. Now THAT is an interesting development.

“It’s really getting interesting," Musilli says in, what is for him, a rare moment of understatement.


"Now, all of a sudden, the heat is on and they can’t hide anymore.”

“You have to give them a reasonable expectation of release. You cannot lock up a juvenile and throw the key away.”

We will find out on March 16th.