In 2003, the Michigan Parole Board considered releasing Richard J. “White Boy Rick” Wershe Jr. from prison. He had been sentenced to life for a non-violent but major drug conviction while he was a teenager. One of the most devastating arguments against Wershe’s parole came in the form of a letter from then-Wayne County Prosecutor Michael Duggan.

The man who is now the Mayor of the City of Detroit claims he “doesn’t recall” the letter to the parole board but he recently sidestepped the issue in an interview with WDIV-TV reporter Kevin Dietz, saying his “office” made a recommendation in 2003 and now it’s current prosecutor Kym Worthy’s “job to decide, in 2016, what’s appropriate.

Maybe so, but it’s Mike Duggan’s job to man up and own up to the misstatements and out and out lies in a letter under his name about a prisoner serving a life sentence. If he can defend that letter (he can’t), he should go for it. If not, he should do the right thing in the interest of justice.

The list of people who are responsible or irresponsible in the continued imprisonment of Richard J. Wershe, Jr. is long. I would call them a Basket of Deplorables but that term has already been taken by someone else who has her own issues with what is true and what’s a lie. But I digress.

One of those near the top of the list is Michael Duggan, the sitting Mayor of the City of Detroit. He wrote, or his office wrote in his name, a vicious letter to the Michigan Parole Board in 2003 opposing parole for Wershe. You can read that letter here.

“Wershe’s gang!” (What gang? There are no police or court records of a Wershe gang. None. Zero.)

“Several members of Wershe’s gang were found dead!” (There was no gang. One friend of his was murdered in a romantic triangle. Duggan, current prosecutor Worthy and the Detroit Police cannot cite one, much less “several” dead bodies associated with Wershe.)

“Ruthless drug dealer!” (There’s no evidence Wershe ever operated crack houses. He tried, but failed, to become a cocaine import-wholesaler. As a white teenager in a black city Wershe didn’t have the street network—or gang—to sell crack cocaine.)

“Notorious violent kingpin!” (There is nothing in federal or state court records—nothing—to support the claim that Wershe was a “kingpin.” He was never charged or prosecuted under the “kingpin” drug laws and he was never named in any drug case involving Detroit’s true drug kingpins of that era. The “notorious violent kingpin” lie cannot be supported by anything in the record.)

“The father (Richard Wershe, Sr.) was believed to be an electronics technician for the Mafia!” (Believed by whom? Agents of the FBI—the only law enforcement in Detroit investigating organized crime—literally laugh at this one. Wershe’s father dabbled in electronics and satellite dishes and may have done business with some questionable characters, but there is no evidence—none—that he was an associate of the Detroit Mafia family.)

“Fear of retaliation!” (There is nothing—not a single police report or court filing—to indicate Rick Wershe ever intimated any witnesses. Indeed, just the opposite is true; two key witnesses said they feared and hid from the police, not Rick Wershe. Two men have said separately that the police got rough with them when they refused to give false testimony against Wershe.)

“Menace to society!” (Wershe was never charged with a violent crime. Neither were any members of his “gang”—because he never had a gang.) 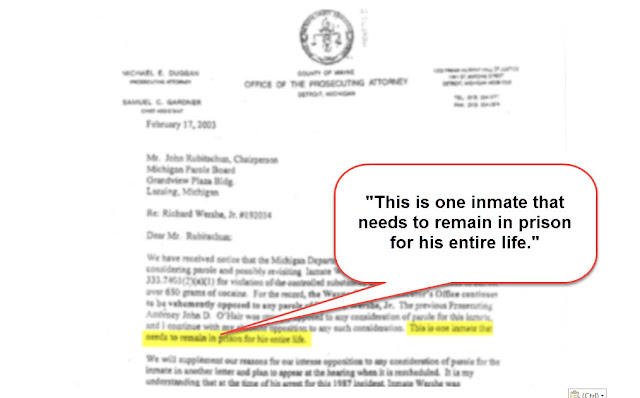 As Informant America has noted in previous posts, the Duggan letter is full of inaccuracies, unsupportable accusations and outright lies.

Mike Duggan should be ashamed to have his named associated with these three pages of slander. He needs to be called out for allowing lies and distortions to be put on the record in his name.

Duggan’s name carries a lot of weight in the criminal justice system because of who he was (a big city prosecutor) and who he is (a big city mayor.)  Mike Duggan needs to stand up for truth and justice. He needs to either a) publicly disavow the letter under his name to the parole board about Rick Wershe or b) call for a public hearing to air the facts, truth-and-reconciliation-style about a man who remains in prison instead of on parole partly due to the falsehoods about Rick Wershe in his letter.

I can guarantee you he won’t do “b” because he can’t. There is no evidence in police files, in prosecutor files, in court files to back up most of the 2003 letter. There is nothing in the federal court records, either.

In 2015 in response to a Freedom of Information Act request from me for the files and information supporting the claims in the Duggan letter, Wayne County Prosecutor Kym Worthy’s office famously denied my request, stating that after a “diligent search” they “certify” the “files do not exist.” They want Wershe to remain in prison until he dies but they didn’t bother to keep any evidence or documentation to support that position if called upon by a court to do so.

The Detroit Police Department, in response to another Freedom of Information Act request, told me they had purged all of their files on Richard J. Wershe, Jr. except for a single file card that said he was convicted in Recorder’s Court on a charge of possession of cocaine over 650 grams and that he was sentenced to life in prison.

A recent Freedom of Information Act request from me shows Duggan doesn’t think he has anything to worry about in terms of a besmirched reputation due to the three pages of Duggan-letter falsehoods against Rick Wershe still floating around as a prosecution exhibit in the effort to deny Wershe a parole.

The City Law Department says there are no internal memos, emails or any other communications between Duggan and his administration regarding the Wershe controversy. It was and is an ugly stain on Duggan’s reputation for honesty and truthfulness but it’s not on his radar screen.