How Michigan Prison Inmate Richard Wershe can help the Republicans

You’re going to tell us a prison inmate can help a political party in the upcoming national election? Are you nuts? Maybe. Maybe not. In some admittedly mixed metaphors, let’s review the bloody political battlefield and see how Rick Wershe might help the GOP make some chicken salad out of a whole lot of chicken s**t.

Tonight Hillary Clinton and Donald Trump went at each other again in the second presidential debate of 2016. The online magazine Politico called it “The Ugliest Debate Ever.”
It was indeed nasty on both sides. Hillary Clinton pointedly refused to shake hands with Trump as they took to the stage.

This time Trump was better prepared.

At one point Clinton said, "You know it’s just awfully good that someone with the temperament of Donald Trump is not in charge of the law in this country.” Trump shot back: “Because you’d be in jail.”

The charges and counter-charges were and are flying fast and thick after a 2005 videotape surfaced Friday in which Trump tells infotainment anchor Billy Bush that he can do whatever he wants with women because he’s a star. Trump made it clear in lewd terms what he meant.

Sunday it got worse for Trump. CNN found a 2004 Trump conversation with radio shock-jock Howard Stern in which Trump tells Stern, "It's okay to call my daughter a 'piece of ass.'"

But Trump fired back. Ninety minutes before the debate he
held a brief panel discussion with four women who have claimed Bill Clinton used them for sex and that Hillary Clinton harassed them and threatened them when they tried to expose Bill Clinton’s sexual predator behavior. Trump brought the four women to the debate but they weren’t seen in the television coverage.

Mainstream establishment Republicans were in shell shock. Many moved at lightning speed to let the media know how upset and dismayed they were over Trump’s lewd remarks about women, and hey, for God’s sake, don’t tar me with that brush.

In Michigan over the weekend, as in many other states, Brand Name Republicans scrambled like rats deserting a sinking ship. On Saturday Lt. Governor Brian Calley and Michigan U.S. Representative Fred Upton joined a growing national chorus of Republican politicians urging Trump to drop out of the race.

“The latest revelations about Donald Trump and his past make it impossible for me to maintain support of him,” Calley said in a statement released to the Detroit News. Calley said he hopes Trump will step aside and allow the GOP to offer a replacement “that Americans could believe in,” noting his belief that Hillary Clinton would be a “disastrous alternative.”

Calley says he will write in the name of Indiana Governor Mike Pence if Trump does not quit the race.

As for Upton, a Congressman from St. Joseph, he described Trump’s 2005 off-camera taped remarks about women outrageous and “a new low.”

Ronna Romney McDaniel, who chairs the Michigan Republican Party called Trump's taped statements "reprehensible and disgusting" but said she thinks Michigan voters know those comments reflect the views of Donald Trump and not other Republicans, including those from Michigan who are running for "down ballot" electives offices.

Clearly, she was trying to limit the damage to other Republicans on the November ballot.

Significantly, the Trump-inspired anxiety and dismay in the GOP political class isn’t shared in equal measure among rank and file Republican voters. Saturday House Majority Leader Paul Ryan, a big shot Republican, held a big fundraiser in his home state of Wisconsin. Friday Ryan dis-invited Trump from the rally after pronouncing himself “sickened” by Trump’s comments that women will let him do whatever he wants with them because he’s “a star.”

Trouble is, when Ryan took the stage at the rally, a number of attendees began booing—at him. He’s part of the Republican establishment and millions of conservative voters made clear in the primaries that they loathe the party’s grand pooh-bahs like Ryan.

Sally Luell, a 68-year old municipal worker who attended the Ryan fundraiser said she found Trump’s comments about women abhorrent, but “I think Hillary Clinton backing her husband when he was doing what he was doing was worse,” she told the Los Angeles Times. Her comment about Bill Clinton’s White House sexcapades when he was President reflects the thinking of many Trump supporters.

I don’t operate or have access to a political polling organization so my impressions of political trends are purely anecdotal. But my sense is the latest Trump uproar isn’t going to move the needle much in terms of the election.

While many women are troubled and upset by Trump’s crudeness and sexism, it’s not enough to get them to vote for the distrusted and detested Hillary Clinton.

“Bill Clinton was getting b*** jobs from an intern while he and Hillary were in the White House and I’m supposed to get upset about Trump’s comments about women?” one woman asked me rhetorically.

By every indication Donald Trump is a misogynist. The legendary 1920s newspaper columnist H.L. Mencken once defined a misogynist as a man who hates women almost as much as they hate each other. There are plenty of American women who hate Hillary Clinton.

What the Washington political and media elites can’t seem to get through their heads is that vast numbers of Americans, from the supporters of Bernie Sanders to the supporters of Donald Trump, are fed up with the status quo. The establishment power-brokers of both parties just don’t get it.

The game is changing.

Going forward the Republican Party, including the GOP in Michigan, is faced with some unpleasant truths. Short term, it's painfully obvious "the base" ain't buying what the political power brokers are selling. The Party needs a new pitch, on many things.

Check out the obituary pages. White males are dying off. Politically, demographics are destiny. Over half of the nation’s voters are women. Latinos and Asians are rapidly replacing white males in the nation’s population. And blacks have been and remain a substantial voting bloc.

If the Republican Party as we’ve known it is to remain viable and not doomed to become just a couple of paragraphs in the history books, it’s attitude and positions are going to have to change. It is going to have to find a way to accommodate the concerns that translate in to political issues for people who are not white males.

President Barack Obama has made political hay in recent months out of pardons for federal prisoners doing time for drug crimes. It reduces the federal prison population and the taxpayer costs that go with it.

Obama has commuted 774 prison sentences, more than the past 11 presidents combined. He did it because the Obama team has concluded it will play in Peoria as the saying goes.

The country’s attitude about the punishment part of crime and punishment is changing. For 30-some years it has been fashionable for politicians of all stripes to show they are “tough on crime.”

“Lock ‘em up and throw away the key.” It sounds good. But voters have come to realize that kind of macho tough-on-crime attitude costs money—a lot of money. Money that is coming out of their wallets. Building more and bigger prisons means staffing them and paying the staff salaries and benefits. It means equipping the prisons and maintaining that equipment. It means providing everything including food and medical care for all those prisoners who have been locked up for long sentences.

Funny thing about long prison sentences. The prisoners get older. And their health fails like the rest of us. It costs money to give them health care. And the courts have made it clear over and over again that if society deprives someone of their liberty, society has an obligation to care for that individual as long as he or she is in prison.

Governors are notoriously stingy with pardons and sentence commutations. Michigan’s governor is no exception.

Rick Snyder has no interest in prisons and the state’s corrections system even though it accounts for a fifth of the entire state budget. He didn’t have any interest in water for citizens, either, until something happened in—where was it again?—Oh, yes, Flint.

Snyder could reduce the state’s prison population and he and his political party could claim credit; Not for giving prisoners a break, but they could spin it as giving a break to the taxpayers.

Snyder could free hundreds of inmates and make a solid political case that he’s saving truckloads of tax dollars; something Republicans and other conservatives care about as much as crime and punishment. As noted above, Corrections is responsible for about 20% of Michigan’s annual tax expenditures. Making a dent in that makes political sense.

Even Newt Gingrich says so.

The former Speaker of the House and frequent Republican talking head on the news shows wrote an editorial page opinion two years ago arguing that Michigan needs to enact prison reform—to cut taxes. Gingrich gave Snyder and the other Republicans in Lansing a road map on how to make political hay out of reducing the prison inmate population.

Most of the Michigan prison inmates—like most other states—are black. Pardoning or commuting the sentences of all inmates convicted of non-violent drug offenses is something Snyder and other Republicans could trumpet in the inner cities come election time. This election and others to come. 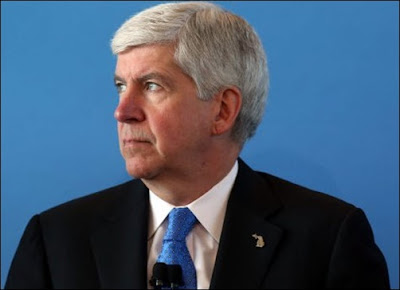 Gov. Rick Snyder. Is he smart enough to figure it out? (Photo: Carlos Osorio, AP)

But to mollify mostly white hardcore outstate conservatives and convince them that he isn’t just pandering to blacks, Snyder needs at least a few token white inmates on his pardon/commutation list. You know, just to make it look good.

Arguably, Michigan has no higher profile white drug inmate than Richard J. Wershe, Jr. He’s been behind bars for nearly 29 years for a non-violent drug conviction. Admitted drug hitmen, paid killers, have been convicted, sentenced, done their time and are back out in the time Wershe has been behind bars.

Wershe is a political prisoner. He’s served an extraordinarily long prison sentence because he was a white FBI informant against politically powerful criminals in Detroit. Some Detroit cops made a shaky drug case against him but it was enough to send him to prison for a life term. Corrupt Detroit politicians like the late Gil Hill, who Wershe informed on, conspired to keep him in prison until he dies. So far, the vendetta of the corrupt has worked.

An added benefit for Snyder would be a pardon or
commutation for Wershe would be a way to stick it in the eye of the politically corrupt in Detroit without overtly doing so.

Is Rick Snyder smart enough to figure all this out? Is Donald Trump capable of keeping his mouth and his Twitter feeds under control? The answers to both questions are not known.
Posted by Vince Wade at 10:28 PM